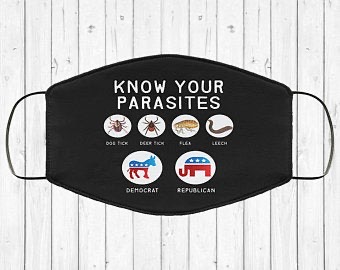 When trying to introduce the philosophy to newcomers, I always try to begin with an introduction to first principles, which typically leads to a discussion about the non-aggression principle (NAP). And there could never be a better test for the NAP than a time like this with the issue of masks, the topic at the top of everyone’s social media feeds for months now.

Masks are the quintessential controversial subject. I’ve rarely seen such a sticky divisive topic. There’s little point in trying to change the minds of people with such strong emotional investments. Facts, studies, data, charts, opinions, and expert testimony have proven entirely ineffective in trying to convince the public to change their minds, no matter which side you’re on. This article isn’t even remotely an attempt to try to do that. But for those rare occasions when someone is fence-sitting on their political persuasions, we as libertarians should be prepared to answer the question that always follows a description of the NAP. Almost immediately after introducing the idea of the NAP, the inevitable response comes up:

“Okay then. It seems to me that someone not wearing a mask is an act of aggression.”

How should libertarians respond to this (or its variants which come with a gotcha tone or glare)? I’ll be the first to admit, it is a tricky gray area. I’ve even seen many libertarians who believe it is an act of aggression. I do not. What follows is my thought process in the matter. Let’s first ask a few questions in response.

In my view, a violation of the NAP should include a directly identifiable victim and a directly identifiable aggressor. Unless someone is acting with malice aforethought to infect another person, it should not be considered an act of aggression. Given that we can’t determine with certainty that someone with the disease will infect another, we cannot be certain how some contracted the disease. There is no directly identifiable aggressor. Was it the guy in the checkout lane without a mask or was it the cashier bagging your groceries whose gloves have touched everyone else’s groceries?

And now that we know the statistical likelihood of any given citizen of the U.S. dying from the disease is a tiny fraction (0.05%1), can’t we at least say this contagion, though real, isn’t going to turn the U.S into Armageddon? While this calculation may be twisted by some to be something it isn’t, as of this writing, it is factually correct. I only mention this because I believe there is a theoretical case where not wearing a mask might be considered an aggression. It would be something like the following:

Some may argue as follows:  if X% is 90%+ and Y is 90%+, that it may well meet the threshold of being serious enough to conclude it is an act of aggression.  This is because we can determine there is a 90+ percent chance of passing the disease on to someone else. These same people also agree if the value of Y% is equal to zero, it would not meet the threshold and therefore not wearing a mask would not be an act of aggression.

This might be suitable compromise for some, but because the values attributed to X, Y, and Z (as well as “high degree of certainty”) are subjective, for me, it is not an act of aggression, because there is no certain way of identifying the aggressor when someone else becomes infected.

There are moral questions involved with the decisions people make with regard to public health. Those are all debatable and worthy of consideration, but using the NAP isn’t one of those.