Following is an excerpt from my book, Status Schmo, describing how men react to getting kicked in the balls.  It was describing how the protagonist was suffering from a long list of transgressions by government. A prominent media host posted an article to give others the sense of pain he had to endure as a result.-----------Every man knows what it’s like to get a full kick to the groin, and many women who’ve witnessed it, are usually able to sympathize, at least a little. It’s the only … END_OF_DOCUMENT_TOKEN_TO_BE_REPLACED 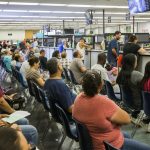 Following is an excerpt from a chapter in my second novel, Status Schmo. You get a good idea what a shit-show Joe's (protagonist) life is about to become as he tries to register a car purchased in New Mexico at a Kentucky DMV. This stuff really happens, folks.Joe opened the door to the DMV and confronted a massive, unruly crowd. It was worse than a gaggle of the worst of humanity and grumpy senior citizens at Golden Buffet on one of those all-you-can-eat seafood nights when the staff … END_OF_DOCUMENT_TOKEN_TO_BE_REPLACED

Here's how I did it. I worked my ass off for a year and a half and I had a lot of help. That I got everything together and submitted them on the same day was a total coincidence.  So there.  The rest of this article is about those two books.  Sorry if I didn't offer any inspirational secrets. If I can't toot my own horn on my own blog, then it's not safe to do so anywhere, right?  Yesterday, I submitted two new books for publication. One is fiction, my second novel. The other is … END_OF_DOCUMENT_TOKEN_TO_BE_REPLACED

I went down a rabbit hole and now I'm climbing out.One of my editors recently warned be against using brand names in my current manuscript, including the names of social media brands. Kudos to her for doing so. That's part of her job, but it got me to thinking. If I can't safely use the name of Facebook, Twitter, or Youtube without fear of some kind of action being taken against me, why is it that this is only a fear in the realm of fiction. I realize the likelihood of this happening to me … END_OF_DOCUMENT_TOKEN_TO_BE_REPLACED

What's Wrong With You? Psychologically, I mean.Come on. You're dying to know, right? If you're brave enough to be psycho-analyzed and review the results, then there's no better way than to read 12 Rules for Life: An Antidote to Chaos. If you're intellectually honest and you want to really dig in to that noggin of yours, now's your chance -- especially if you fall anywhere to right of Karl Marx on the spectrum of social, economic, and political theory. If you fall on the left of that, there's … END_OF_DOCUMENT_TOKEN_TO_BE_REPLACED